“The Color of Blood” by Gideon Jeph Wabvutu (Zimbabwe)

A historical drama set in Colonial Rhodesia in 1978.

About the playwright: Gideon Jeph Wabvuta was born in Harare, Zimbabwe, the oldest son of an electronics technician and a former teacher. He grew up in Mbare, a ghetto in Harare, where his love for the arts was born. He grew up with dance and theater around him, but only participated briefly as a writer when he was 16. A few years later he returned to the arts as a performer and writer at a community theater group in Mbare. This strengthened his love for the arts, and led to him enroll at the University of Zimbabwe where he received arts training as an actor and writer. During his time in University, he worked with a Zimbabwean-American organization Almasi Arts as an actor, writer, and director. This resulted in him being invited to the Ojai Playwrights Conference where he wrote and performed his solo show Mbare Dreams. Soon after graduation, he joined Savanna Trust, where he was part of a troop of actors that went around the country performing on issues that include, human rights, gender equality, poverty alleviation, and domestic violence.

Two young men raised in same house but from different races, are brought together again at a funeral in Soweto where bitterness and hatred do not evaporate even in the wake of grief. A fast paced one act drama.

About the playwritght: Mary Holmström

Mary Holmström was born in Johannesburg, South Africa. In 1952 she emigrated with her family from South Africa to the United States. She received a B.A. degree in English from the University of California at Berkeley in 1964, and in 1983 obtained an M.A. degree in Creative Writing from Antioch International in London, England. Her one-act play Incident in Soweto was performed in London in 1981. From 1989-2001, Mary taught African Literature and writing courses at the PCC Cascade Campus. In 1991, she founded the Cascade Festival of African Films with three of her PCC colleagues, Linda Elegant, Joseph Smith-Buani, and Michael Dembrow. Mary served as co-director and ran the festival as a full-time volunteer for the first 20 years of the festival. She continues to serve on the CFAF Executive Committee as a Board member, Festival Adviser, and film programmer.

“Her Portmanteau” by Mfoniso Udofia (U.S./Nigeria)

As Nigerian traditions clash with the realities of American life, Abasiama and her daughters must confront complex familial legacies that span time, geography, language and culture. Probes into the ties that bind mothers and daughters and how we define home.

About the playwright: Mfoniso Udofia 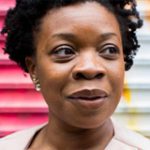 Mfoniso Udofia is a first-generation Nigerian-American storyteller and educator, attended Wellesley College and obtained her MFA in acting from the American Conservatory Theater. Ufot Family Cycle plays, SOJOURNERS and HER PORTMANTEAU, were produced Spring 2017 as part of New York Theatre Workshop’s season. In Winter 2016, Playwrights Realm produced the off-Broadway World Premiere of SOJOURNERS. In Spring 2016, The Magic Theater in San Francisco produced the West Coast Premiere of SOJOURNERS and the World Premiere of the third installation in the Ufot Family Cycle, RUNBOYRUN. Mfoniso is the recipient of The Playwrights’ Center’s 2017-18 McKnight National Residency and Commission with which she will write the 7th, as of yet untitled, installation in the project 9-play Ufot Family Cycle. During Summer 2017, Mfoniso will workshop 5th cycle play, IN OLD AGE, at Portland Center Stage’s JAW Festival; 6th cycle play, ADIA AND CLORA SNATCH JOY with Berkeley Rep’s Ground Floor; and 2nd cycle play, THE GROVE, with the OCC in Seattle.  Mfoniso is also currently working on Oregon Shakespeare Festival’s Play On! commission translating Shakespeare’s, OTHELLO. She’s also the Artistic Director of the NOW AFRICA: Playwrights Festival and a proud member of New Dramatists class of 2023.  Please follow her at www.mfonisoudofia.com.